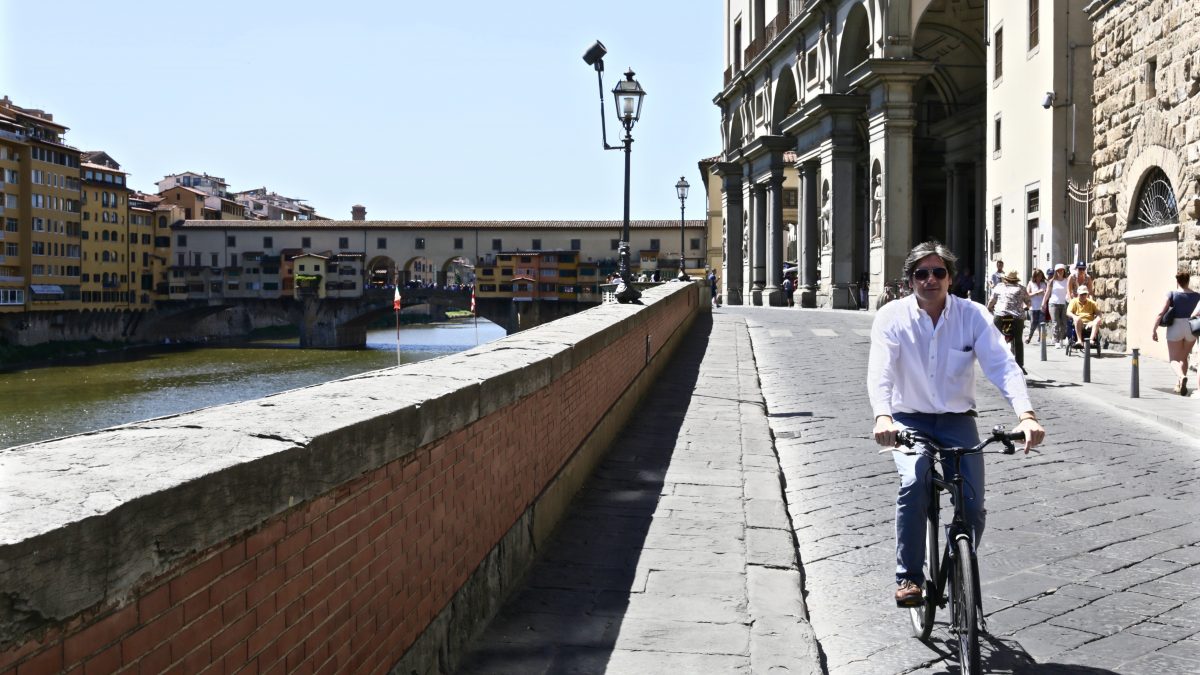 10. Vasari Corridor *Gallery under renovation until 2020*
This kilometer long passageway, named after the architect, was commissioned by Cosimo de’Medici as a gift to celebrate the marriage of his son, Francesco I, with Joanna of Austria. Once built, the passageway acted as a safe way for the Medici family to move safely between their residence to the government building; Palazzo Pitti to Palazzo Vecchio. Today the gallery connects the Uffizi gallery to the Pitti Palace. Due to the entrance of the corridor being an unmarked door, many visitors often pass it by when inside the Uffizi gallery. Inside the gallery hangs works from the 16th and 17th century along with artist’s self portraits.

9. Stefano Bardini Museum
Originally a church, the Stefano Bardini Museum was restructured by Bardini himself to be set up as a showroom of his art for potential buyers. Bardini believed that it was not about the way the art looked, but rather the environment that they created. Due to this vision, the museum is set up in scenes, and not chronological order. Along with the art and sculptures, the ceilings are also works of art within themselves.

8. Palatine Gallery
This gallery is located on the first floor of The Pitti Palace which is where the Medici family took residence. In the end of the 18th century, the Habsburg-Lorraine family hung up around 500 masterpieces that the Medici family had in their personal collection. Each painting is surrounded by a lavish gold frame and complemented by sculptures, vases, and other pieces from the 17th century. In the gallery, the largest collection of Raphael paintings and other invaluable works hang in all of their glory.

7. Stibbert Museum
When Frederick Stibbert was 21 years old, he inherited a great fortune from his grandfather, the Governor of Bengal, India. With this fortune, he turned his personal home into a real museum of armour, costumes, paintings, tapestries, and furniture. Now the museum is home to over 50,000 items, most of which are armour from many different cultures. The museum also is home to a romantic, English themed garden, which entrance is including in the gallery ticket.

6. Natural Museum of Bargello
Known as the Museo Nazionale in Italy, this museum was the first national museum to open once Italy was unified. It is located in the Palazzo Del Bargello and is home to amazing works from Donatella, Verrocchio, Michelangelo, and many more. This museum is mostly known for its vast collection of sculptures. Once inside the entrance, you enter an irregular courtyard with many hallways and staircases in every direction. Also unique to this museum is its collection of metal and goldworks from the 16th century.

5. San Marco Museum
Built between 1452 and 1473 by Michelozzo, this elegant building was the first public library of the western world. Later in 1866, it was confiscated by the Italian government and opened as a national monument in 1869. The museum itself is located in the former monastery within the library. This museum is jam packed with frescos by Beato Angelico, and many others that belonged to belonged to Cosimo the Elder of the Medici family. One of the most memorable parts of the museum is the fresco painted at the top of the staircase that is a symbol of purity, faith, and obedience.

4. Pitti Palace
Chosen by Cosimo I de Medici and his wife, The Pitti Palace soon become known as the symbol of the Medici family. After the Medici family inhabited the palace, it was home to two other royal dynasties: the Lorraine-Habsburg and the Kings of the House of Savoy. Today, the Palace is divided into five separate museums, having something for everyone in the family. The galleries include Modern Art, the Treasury of the Grand Dukes, the Palatine Gallery, the Royal and Imperial Apartments, and Museum of Costume and Fashion.

3. Palazzo Vecchio
Known for its political and civil power, the Palazzo Vecchio is one of the most recognizable buildings in Florence. It was constructed on top of the ancient theater of the roman colony of Florentia, which ruins can be viewed on the the underground level once inside. The largest and most historic room is the Salone dei Cinquecento (Hall of five hundred), which was built in 1494 and is covered in beautiful frescoes and paneled ceilings. Guests can also climb the Torre di Arnolfo, or Arnolfo’s tower. This tower is 95 meters and 416 steps up, but the view from the top is worth it.

2. Galleria dell’Accademia
The gallery is located in some rooms that used to belong to the hospital of San Mateo and to the monastery of San Nicolas. This museum is home to one of the most recognized Florence sculture; The David. It was construction between 1501-1504 originally to be placed outside of the Cathedral of Florence. Once completed, David became symbol of the defeat of the Medici family as well as courage. Along with Michelangelo’s David, the gallery is also home to many other sculptures including “the Prisoners” which were comissed by Pope Julius to be put on his grave.

1. Galleria Degli Uffizi
If there is only time to visit one museum in Florence, this should be your top priority. Located on the edge of the Arno River, right off the Ponte Vecchio, this museum is home to a massive collection of artwork, architecture, sculptures, and books. This museum is also home to the largest collection of Medici family sculptures. The gallery occupies the entirety of the first and second floors of a large scale building designed by Giorgio Vasari. The vast amount of art could keep you occupied for hours, but if you need a quick break head up to the second floor adjacent to the river for a gorgeous view.